The FN SCAR was initially developed for military use but has been modified for civilians, and its scarcity adds to the demand. Is the FN SCAR for you? See features, benefits, specs and reviews below.

SCAR stands for Special Operation Forces Combat Assault Rifle and was developed because the Army wanted a reliable weapon system for both 7.62x51mm and 5.56x45mm NATO ammo. Fabrique Nationale Herstal (FN) produced the SCAR Mk17 chambered in 7.62x51mm, and the SCAR Mk16 chambered in 5.56x45mm. The SCAR 20S sports a 20" barrel and shoots the 7.62x51mm round.

BENEFITS – WHY BUY A FN SCAR?

NOTE: If the FN SCAR you want is temporarily out of stock, please click the "EMAIL ME WHEN IN STOCK" button to be notified.

The FN SCAR 16S is a semi-automatic rifle chambered in 5.56x45mm for civilian use and is a versatile, modular, lightweight, and accurate rifle.

The FN SCAR 16S is fast-handling, light, and quick shooting. It is chambered in 5.56x45mm with a cold hammer-forged, free-floating barrel and chrome-lined bore. The operating controls are fully-ambidextrous, improving ergonomics and making it easily adaptable for anyone to shoot in any shooting position.

It has an integrated MIL-STD 1913 optical rail with three accessory rails for mounting your choice of scopes, sights, tactical lights, or lasers. The polymer stock is telescoping, side-folding, and fully adjustable for height and length of pull. It’s available in matte black or flat dark earth.

The FN SCAR 17s is a semi-automatic rifle chambered in 7.62x51mm for civilian use and is a versatile, modular, lightweight, and accurate rifle with a 16.25” barrel. Other than those differences, it’s identical to what the Special Operations troops carry, but for civilian use. It weighs eight pounds, but the weight is evenly distributed.

It has a collapsible folding stock, adjustable cheek riser, Picatinny rail, folding iron sights on the front and rear, and ambidextrous selector and magazine release. You can move the charging handle from one side to the other easily. It can also be used as a forward assist if the bolt fails.

The barrel is cold-hammer forged, lined with chrome, and free floating. While it comes standard with a 16.25” barrel, aftermarket barrels are available.

The FN SCAR 17S has superior reliability, downrange power, and long-range accuracy. Its versatility enables its practical use in almost any situation. It is chambered in 7.62x51mm and has the same cold hammer-forged, free-floating barrel as the 16S.

It features the same ambidextrous controls, accessory rails, and fully adjustable polymer stock, and is ideal for Heavy Metal 3-Gun matches. Unlike the 16S, the 17S is only available in the flat dark earth finish.

What is the difference between and AR15 and an FN SCAR? AR15s are proven rifles with a lot of aftermarket parts and accessories for customization, while the SCAR is the newcomer that just might beat it out when it comes to performance and mechanics. SEE ALL AR15 Rifles for Sale

While bolt travel time and trigger reset on the SCAR are both longer than the AR15, it allows more time for the spent cartridge to eject, reducing the risk of jams or failures-to-feed. “To me, this is another plus for the Scar as it gives the magazine just a little bit more time to present a round for feeding.” (2)

The trigger reset on the AR15 is shorter, so you can fire faster than the SCAR, but the AR bolt is a common failure point. The SCAR has a more substantial bolt, reducing that risk. On the other hand, there aren’t a lot of aftermarket parts for the SCAR available, but there likely will be.

“The Scar has only been around for a few years, even less in public hands. In those few years it has undergone very extensive proofing and testing, more so than the ubiquitous AR15 and 1911 combined during their inception.” “I have actually found I favor the Scar charging handle over the AR and here is why. I can visually glance down without canting the rifle and tell if I am out of ammo or had a malfunction. On the AR, you have less than a 1/16th of an inch “overlapping” contact from the charging handle to the carrier.” (2) 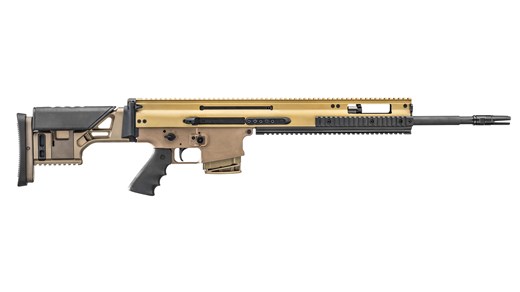 The SCAR 20S is the long-range precision rifle in the SCAR family. The 20S shoots 7.62x51mm rounds through a 20" barrel for extreme accuracy at distance. The gas-operated piston design absorbs recoil efficiently to improve follow-up shots and maintain target acquisition. Lending further aid is the match-grade, two-stage trigger that breaks crisply at 3.5-4.5 pounds, full-length MIL-STD 1913 rail at 12 o’clock position, and fixed buttstock providing adaptability to fit to each user’s needs through adjustable length of pull and cheek rest height.

The fact that the Army trusts the reliability and accuracy of the FN SCAR for its Special Operations teams should give any shooter confidence in its ability to perform to the highest standards. It hasn’t been around for long, but it’s been tested beyond necessary means to ensure it’s one of the best semi-automatic rifles a civilian can buy. It also makes the SCAR rare, and subject to shortages in supply. If out of stock, please click the “Email Me When In Stock” button to be notified.