A formidable combination of German and Swiss engineering

When the Swiss Federal Ministry of Defense began its search for a new rifle, the Swiss Wagon Factory developed the Prelaz-Burnand rifle, which drastically outperformed the shooting distance of the competition. After switching names from the Swiss Wagon Factory to the Swiss Industrial Company—Schweizerische Industrie-Gesellschaft, known worldwide as SIG—they began producing the SIG P210 pistol for the Swiss military. While working on its follow-up, SIG partnered with German gun maker J.P. Sauer & Sohn, and in 1975 the first SIG Sauer pistol was born and became an instant hit.

By 1987, SIG ARMS was established in Herndon, Virginia, finally importing their well-known firearms to the states, later renaming themselves SIG Sauer to reflect their worldwide growth. Along with their firearms, they also began delivering customer service from highly qualified gunsmiths, proving their dedication to high standards runs deep. Today SIG Sauer guns are revered worldwide for their elite Swiss and German pedigree.

As the name suggests, the P365 line was designed to be a top performer in every situation, 365 days a year. At GrabAGun, customers repeatedly come back to the P365 9MM 3.1” Barrel 10-Rounds with X-Ray3 Sights. With its high-capacity, micro-compact frame, it is a revolutionary concealed carry. The 2 magazines are chambered in 9mm and the X-Ray3 day / night sights provide accurate target location any time you need it. The innovation doesn’t stop there.

The P365X features the same revolutionary compact frame as well as the XSERIES flat trigger. For a pocket-sized pistol, this offers more stability and control. And then there’s the P365XL. It’s everything you love about the P365 series and more with a 3.7-inch barrel and a new slide that adds only ½ an inch to the overall length and height. This is the definition of micro-compact concealability with full-sized shootability. The P365X line is designed for everyday carry and provides the confidence you need with the comfort you want in a daily carry pistol.

Just as popular and functional, the P320 is a firearm trusted by law enforcement and military personnel. In fact, it was designed from the ground up with their input. The M17 and M18 are currently the chosen service pistol of the United States Armed Forces. In 2017, the Sig Sauer P320 won the Army’s XM17 Modular Handgun System competition. The P320 M17 Coyote Tan 9MM 4.7” Barrel 21-Rounds Siglite Front Sights is highly regarded by our customers, and rightly so. Featuring a smooth trigger, 3-point takedown, and unmatched modularity, this pistol can be used by just about anyone, anywhere. The M17 model features a stainless steel frame and slide, the popular coyote tan finish, and comes with two 17-rounds magazines and one 21-round magazine. Get yours today with the best handgun deals online through GrabAGun!

The M400 Tread 5.56 / .223 REM 16-Inch 30Rds is hands down, the most versatile carbine that can handle any job. It truly is the ultimate multi-purpose AR style rifle with a 16-inch barrel, free-floating M-LOK handguard, ambidextrous controls, and an upgraded trigger. The included muzzle break helps to fight muzzle creep, ensuring greater target accuracy during rapid fire. Coming with optics ready mounts on some models, you’ll have a customizable, versatile, and reliable rifle in your collection.

Inspired by the SIG Sauer Classic Line, the SP2022 maintains several of the original features while integrating a durable, lightweight frame and M1913 accessory rail. The SP2022 9MM 3.9-Inch 15RD - Fixed Sights is one of the best examples of this. With a wear-resistant slide, DA/SA trigger, fixed sights, and a 15-round magazine chambered in 9mm, you’ll wonder why you waited so long to pick one up. If you need a CA compliant version, the SP2022 Full Size CA Compliant 9mm 3.9-inch 10Rds is ready for you. Either way, this line of pistols has an enviable reputation and reliably performs in the hands of military and law enforcement professionals around the world.

When you need maximum output, while still maintaining discretion, the MCX Rattler line has you covered. More than that, it’s configurable in over 500 combinations, making it ready for any situation you find yourself in. GrabAGun customers enjoy the MCX Rattler 5.56NATO 30Rds 5.5-inches for these very reasons. The 5.5-inch barrel and folding pivoting contour keep it easy to conceal while the free-floating M-LOK handguard and PDW upper allow you to customize this pistol to your exact specifications. Pick up one for yourself today through GrabAGun, the best place for affordable pistols online!

SIG Sauer doesn’t just manufacture firearms, they also produce ammo, stocks, and other OEM parts. Our customers repeatedly choose the Elite Performance 9mm 115GR V-Crown JHP 20Rds because it works well with the Sig P365 and others. Those that don’t want to waste time reloading at the range have picked up the P365 Magazine 9mm 12-Rounds to go with their firearm and ammunition.

We also offer OEM parts to help you fully customize your pistol or rifle with options like the MCX / MPX Collapsible Stock Assembly Black and the Romeo 5 Optics Line. This optics line is designed to provide civilians and armed professionals rapid target acquisition in any situation. Operational in all light levels, the 8 daytime illumination settings and 2 night vision settings are powered by MOTAC, the motion activated illumination that is activated by movement. It even shuts down when not in use for safety and longevity. Customers trust the Red Dot Black Sight 1x20 2 MOA when they are out hunting because of it’s consistent performance and reliability.

At GrabAGun, we offer prices and services you won't find anywhere else. Simply click our GrabAQuote tool and enjoy instant savings. 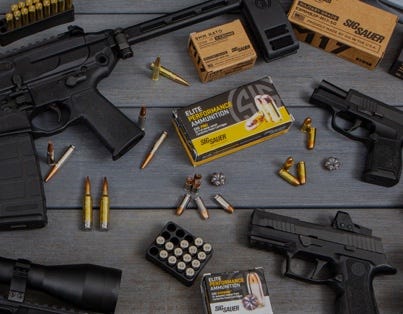