REMINGTON 870 FOR SALE with CHEAP SHIPPING!

With over 11 million Remington 870 shotguns produced since 1951, it is the best-selling shotgun in history, and for a good reason. Read the reviews, see the specs and compare the features below to find the 870 shotgun for you.

Even if the 870 were new today, it would be considered revolutionary. For pump-action shotgun designs, it showed some significant advances in durability and strength when it was first produced in 1950. It had sleek lines and bind-free action. It still maintains these features today after being in production for more than sixty years.

The Remington 870 has been used in over twenty-five countries for both police and military applications, it has its place in sport shooting, and it’s the benchmark by which all other pump-action shotguns are measured.

The Remington 870 comes in dozens of configurations to meet any need. It was one of the most versatile shotguns on the market when it first came out, and that remains true today. The receiver is machined from a single block of solid steel, giving it its signature strength and smooth shooting. “Remington’s Model 870 shotgun has earned its just place as the benchmark of American shotguns.” (1)

In 1987, the company introduced the Express line. A less-polished version, these were intended to hit a lower price point in the market. Accordingly, the metal was matte finished, and wood got much less attention in the polishing stages.(3)

The 870 Express pump gun offers the best of all worlds. Beneath no-nonsense, ready-for-work exterior of the Model 870 Express lies the same quality, precision, and dependability that you'll find in the legendary Model 870 Wingmaster®, but at a much more affordable price.

The 870 Express model comes in variants made for tactical, bird hunting, deer hunting, home-defense and everything in between.

The Remington 870 Express is built for work, although shooting it may feel like play. It has black matte, non-reflective metalwork and the hardwood stock and forend on the standard models are sans frills. You choose between a 26- or 28-inch vent rib barrel.

Most models have a single bead sight on the front, and all come with the same solid and dependable action. The twin action bars prevent twisting and binding so getting off a second shot is natural and smooth. The Remington 870 Express is the most affordable of the 870 models, offering the same dependability, quality, and precision as all others. 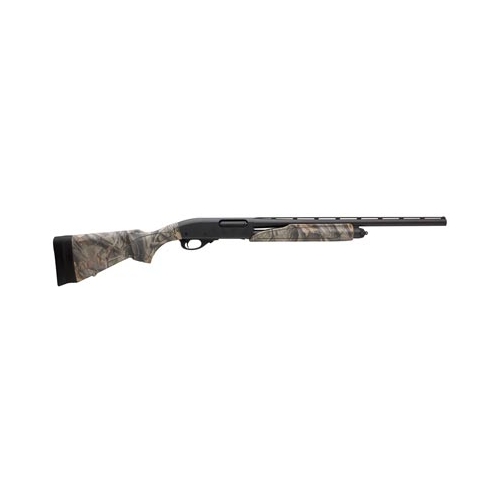 The 20 gauge 870 Express Compact shotguns feature synthetic stocks for durable wear, available in black, plus pink camo and Realtree Hardwoods camo pattern. These shotguns handle 3” shells, and are perfect for younger or smaller shooters. Choose from 18.5” or 21” barrels. 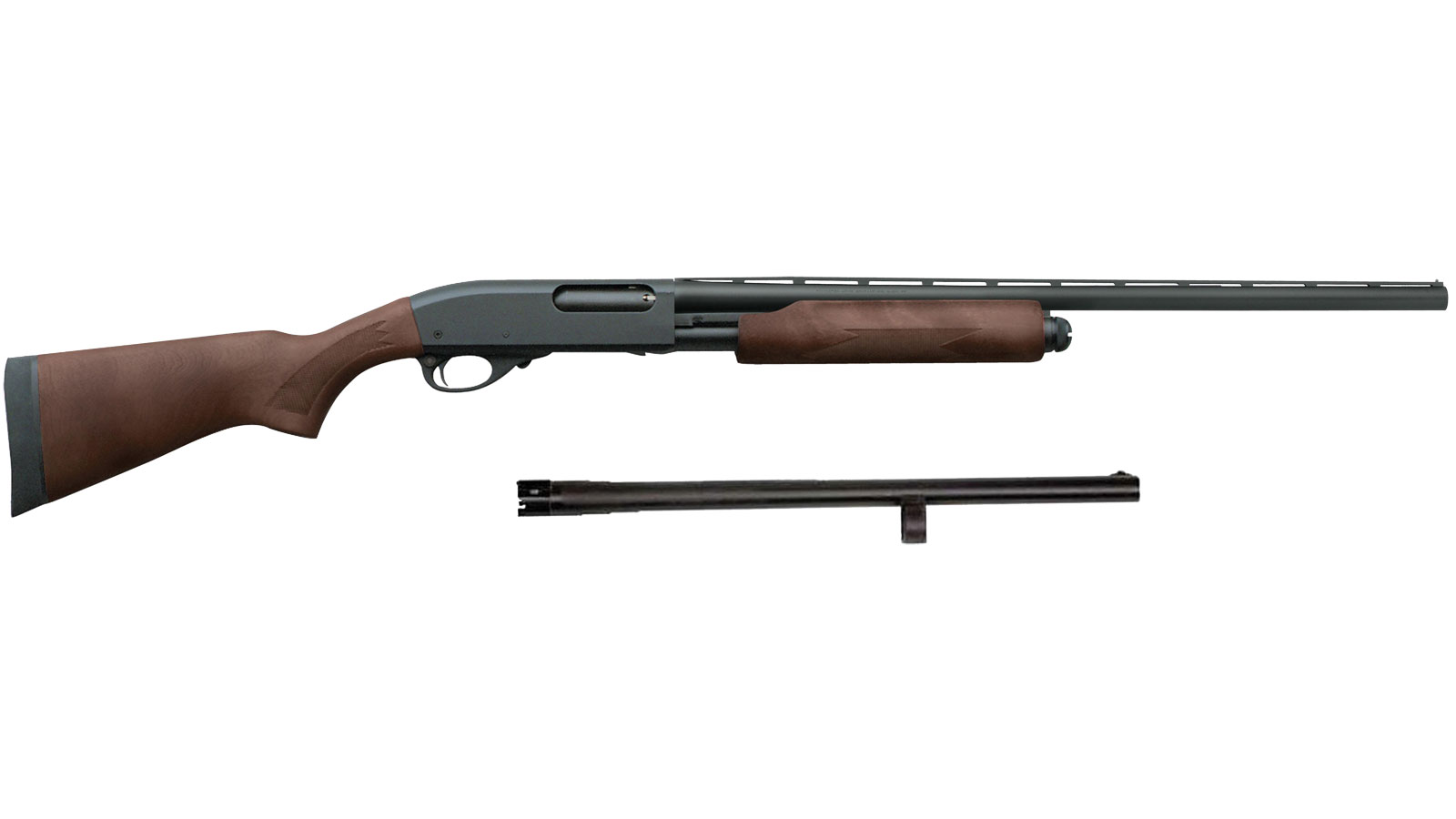 Take on big game with rifle-like performance in an affordable, dependable shotgun with the fully rifled 20 inch barrels on several models and even combo packages.

The Remington 870 Tactical is rugged and dependable. It has continued to evolve since it was first produced in 1950 and it now performs well in increasingly demanding situations.

American Rifleman said, “Introduced in 1950, and manufactured to the tune of 11 million units since that time, the Remington 870 stands alone as the most-produced shotgun in history.” (2) It’s the standard for all high-risk applications on which all other tactical shotguns should be judged. 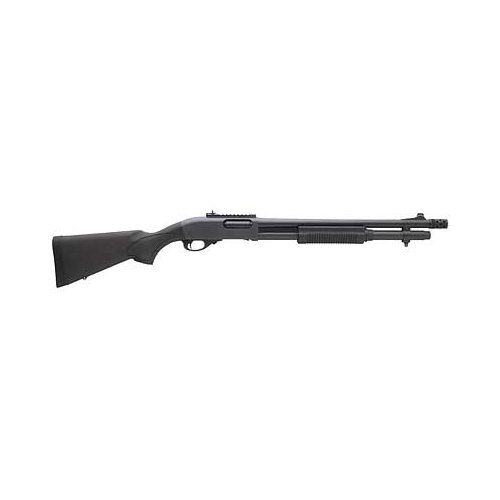 With an 18 ½” barrel, this Remington Express Tactical is quick pointing and easily maneuverable, but about four inches longer overall than the pistol grip TAC-14. The Remington 870 Express Tactical has an extended ported Tactical Rem Choke and can hold seven full rounds of 2 ¾” or 3” 12-gauge ammunition.

Using the Ghost Ring Sights, you get rapid target acquisition and accurate shot placement. The blade sight and Ghost ring sight rail are fully adjustable for elevation and windage, and you can mount other optics or sight systems as well. It comes with a two-shot magazine extension, and black synthetic stocks and forends. 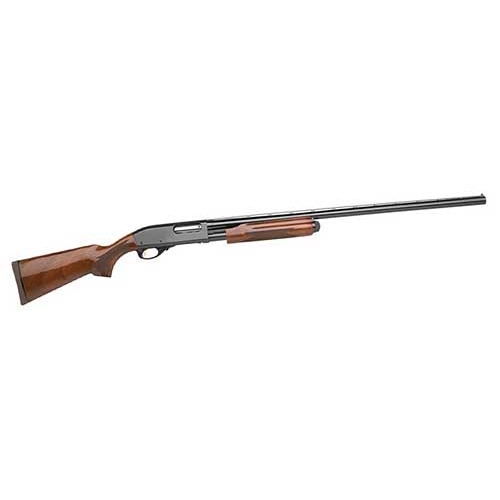 The Remington 870 Wingmaster offers precision, strength, reliability, and smooth shooting. Its durability allows it to outperform all of the competition today. It will shoot under any conditions you throw at it. It cycles smoothly and is one of the best performing 870s yet if that’s even possible.

The American walnut wood stock and the blued steel barrel and receiver make up its timeless look and feel. The receiver machined from a single block of solid steel creates a shotgun with superior strength and durability.

The 870 DM is the only magazine-fed shotgun built on the pedigree of the world’s strongest, smoothest, and most reliable pump shotgun. Featuring a detachable magazine system and fire controls designed from the ground, up available with 3-, and 6-round mags. It’s the fastest response time of any pump shotgun in history, and the ultimate choice for a home defense shotgun.

Given that the Remington 870 series is the best-selling pump-action shotgun series of all time, there’s no question about its quality, dependability, or versatility. With dozens of varieties to choose from and more accessories available than you could ever have time to use, there’s something to suit your unique needs.