Personal Defense World said about triple barrel shotguns: “The double gun remains one of the most prized hunting arms in the world, as well as the foundation for generations of side-by-side and over/under shotgun designs. For bird hunting, small game and deer, as well as for home defense, the double gun is still one of the best options. It’s simple, easy to load, rudimentary in operation and quite affordable. So how do you improve on all this? Add another barrel.”(1)

As Downrange TV put it,” Marked as the Chiappa Triple Threat it has a big sticker running down one of the barrels announcing it is a Charles Daly brand. The gun itself is inscribed with the legend “Chiappa USA Ltd, Dayton OH, Akkar – Turkey”.”(2)

WHY A TRIPLE BARREL SHOTGUN?

Watch this short video to see all the models, the specs, features and benefits of the Charles Daly triple barrel shotgun lineup from Chiappa.

A great gun for home defense or survival, the Triple Threat has compact 18.5” barrels and comes in 12 and 20 gauge. 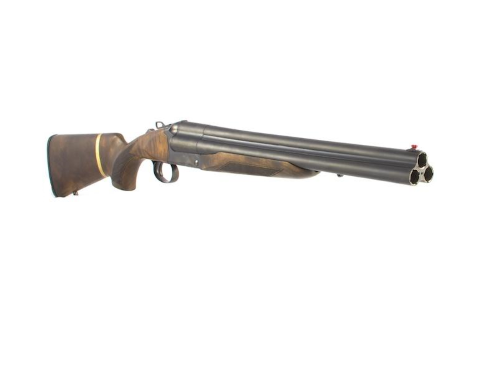 *NOTE: Extractor vs. Ejector - An extractor pushes the spent shell partway out of the chamber for removal by hand. An ejector forcefully ejects the spent shells when the breach is opened. Except for the Honcho Tactical Triple, Charles Daly triple barrel shotguns use an extractor.

American Rifleman wrote, “There's no doubt that Chiappa's Triple Threat is a “look-at-me” shotgun. It oozes cool and has that Hollywood wow factor that generates big smiles at the shooting range. But under all of the flash is a shotgun with class. Think of all the best qualities of a high-end side-by-side and add one more shot to the mix. It’s a winning combination that shooters will enjoy.”(3)

The Triple Crown is made with the same attention to detail and workmanship as any other fine over/under double barrel sporting and hunting shotgun. The weight of the additional barrel soaks up recoil like a sponge and it uses Rem choke tubes for custom setups.

The Chiappa Triple Tom is a unique, triple-barreled over/under shotgun. Based on a traditional two-barrel design, the two lower barrels are in a side by side configuration with the third barrel on top. This gives the shooter a single barrel sight line for aiming all three barrels. All barrels accept the popular RemChoke choke tubes. The Triple Tom is chambered for 3.5" magnum shotshells, making it a great choice as a turkey gun. Features include: