GrabAGun sells the entire line of Chiappa firearms for less! Founded in 1958, Chiappa Firearms began as an Italian firearms manufacturer and has grown to a large firearm holding group and gunmaker. The catalog includes replicas of American historic weapons and muzzleloaders, lever action shotguns and rifles, handguns and rifles in .17 and .22 rimfire, sporting and self-defense handguns such as the famous Rhino, signal guns and air guns. Chiappa USA is also the distributor for Charles Daly shotguns.

Don’t let the futuristic appearance of the Chiappa Rhino revolver distract you from its most innovative feature: the barrel is located at the bottom of the cylinder. 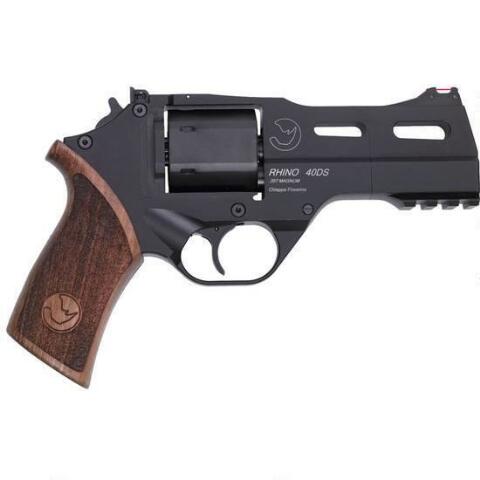 The most distinctive feature of the Chiappa Rhino is lowering the barrel to the bottom of the cylinder to better control recoil and reduce muzzle rise. The external cocking lever is not actually a hammer; it is used to cock the internal hammer and then falls back into place. And unlike most revolvers, it comes with an accessory rail (except for the 2" model), on which lights and lasers can be mounted.  (3)

The Chiappa Double Badger is an over/under rifle and shotgun that is great for hunting, survival or recreational shooting. 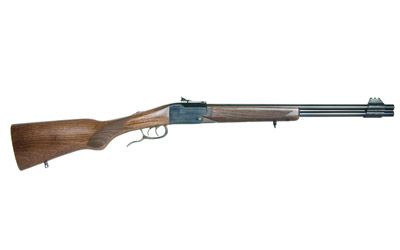 It has the look, feel and function of an over and under shotgun with the added versatility of a rimfire cartridge barrel. It’s available in the following combinations:

Each barrel is selectively fired by its own trigger and controlled by a top tang safety. The Double Badger comes with a fiber optic front sight, plus a 3/8” dovetail rail for mounting optics.

Designed for portability, the Double Badger folds in half for an overall length of 21.20" making storage and transport easy.

The Little Badger packs down small and has rails for infinite options, making it the perfect backpack gun.

Available in .22LR, .22Win Mag, and 17 HMR, the Little Badger folds in half for easy storage and transport. By pulling the lever it folds to its barrel length. Accessories include a nylon carry-bag and special cartridge holder built in to the skeleton stock. The quad rail can fit your favorite accessories, even a pistol grip. The threaded barrel has a muzzle thread of 1/2"-28TP.

The Little Badger Deluxe comes in .22LR and .22Win Mag and has a walnut stock. The Deluxe model is missing the quad rail and integrated cartridge holder, but more than makes up for it in good looks with the hardwood stock.

The Winchester Model 1886 was a lever-action repeating rifle designed by John Browning to handle some of the more powerful cartridges of the period. Nothing says classic stopping power and performance like a lever action .45-70 Gov’t, and nothing says this better than a Model 1886.

The Winchester Model 1892 was a lever-action repeating rifle designed by John Browning as a smaller, lighter version of his large-frame Model 1886, and which replaced the Model 1873 as the company's lever-action for pistol-caliber rounds such as the .44-40. Choose from the classic 1892 Takedown Rifle with an octagonal barrel, the modern performance oriented, hard chromed 1892 Alaskan, or the Mare’s Leg made famous by Hollywood.

The M6 Survival Rifle was an over/under gun issued to United States Air Force aircrews to help forage for food in the event of a plane crash. Based on the original M6, Chiappa’s improved version is available in 12ga/.22lr, 12ga/.22WMR, 20ga/.22lr or 20ga/.22WMR combinations. Sporting two single-shot barrels, the lever action opens the breach for reloading. The Chiappa X-Caliber conversion set also works on the M6, converting to the most popular centerfire pistol and shotguns cartridges.

This lever-action rifle comes in .22LR and .177 calibers, in standard, deluxe and Kodiak all weather models. The take down design lets the shooter separate the buttstock from the action for easy transport and storage. 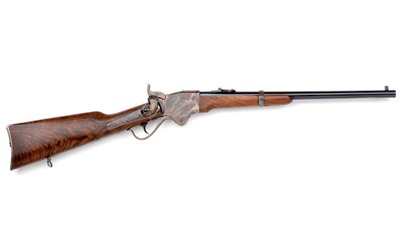 The 1860 Spencer Carbine faithfully resembles the original Spencer rifle in every detail. All the components are made from a solid piece of steel and NC machined and are fully interchangeable with original parts.

The 1887 lever-action shotgun is considered to be the first successful repeating shotgun. The Chiappa Firearms® 1887 is a faithful reproduction of this classic firearm. The 1887 utilizes the design of the original solid lever that includes an innovative internal safety. Featuring a European walnut stock and forearm and color case finished receivers, the 1887 is as beautiful as it is functional.