The Beretta 92FS is the civilian equivalent to the Beretta M9, the official sidearm of the US armed services. Beretta 92 was introduced in 1972, and adopted by the US military in 1985. 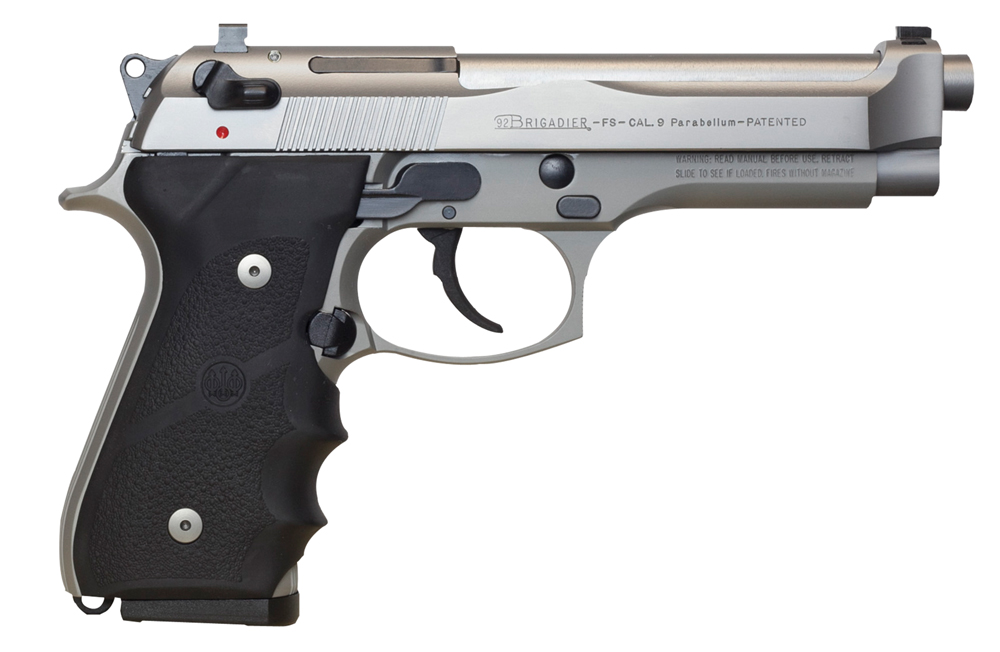 The 92FS comes equipped with a 3-dot sighting system, which is possibly the most used and trusted by tactical and military shooters.

The safety-decocking lever of the 92FS is fully ambidextrous. Besides enabling easy use by right- and left-handed shooters, this features makes it possible to operate the control in different ways and under different tactical situations, such as during unholstering.

The trigger guard of the 92FS has been carefully developed optimized for combat and tactical shooting; it ergonomically supports the off-hand no matter the shooting style or combat stance.

The 92FS features an easy-to-operate disassembly latch, enabling easy field-stripping without any tools.

The rounded external hammer of the 92FS offers all the advantages of a visible hammer, plus a sleek and snag-free profile.

The Bruniton finish on the 92FS offers two great advantages: it is durable, corrosion- and sweat-resistant, while not reflecting light even under a bright, scorching sun.

The advantages of the open slide design of the 92FS are many. Besides shaving weight from the slide, it is legendary for its reliability, virtually eliminating many problems such as stove-piping.

This is yet another safety feature making the 92FS a favorite among tactical and combat pistol shooters: a color-coded indicator reliably shows whether the chamber is loaded.

The mag-release can be reversed for right- or left-handed use, as well as for different grips or shooting styles. This can be done by the user without any gunsmithing.

The two-position safety lever also works as a decocker. When in the down position, it completely impedes any contact between the hammer and the firing pin, making carry safe and worry-free. 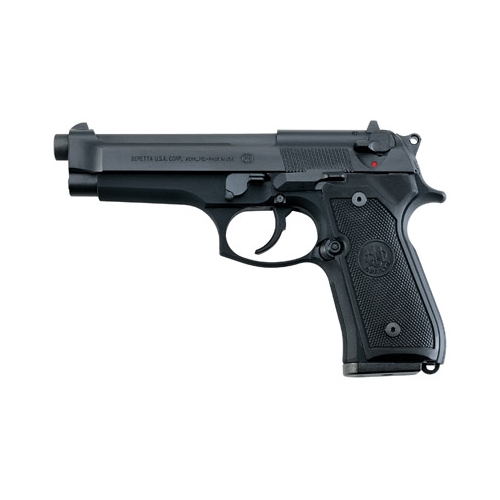 The Beretta 92FS is a durable, reliable, classic 9mm pistol that has earned its place in the holsters of law enforcement, military and self defense professionals around the world. Featuring an alloy frame and steel slide this double/single action pistol is sure to give years of use.

The Beretta 92FS has been the best military, police and tactical pistol for over a quarter century.The 92FS was designed to be the most accurate, durable and reliable semiauto handgun on the market. Easy to use and wielding impressive firepower, it remains the sidearm of the US military and of allied forces, plus police and law-enforcement agencies.The 92FS is a double action / single-action semi auto pistol that employs an open-slide, short-recoil delayed locking-block system, which practically eliminates “stove-piping” and helps flawless cycling and feeding even after thousands and thousands of rounds.

Regardless of the wonderful reputation it may have, the true test for a tactical pistol’s worth is at the shooting range. The 92FS consistently bests the US military requirement of a 10-shot group of 3” or less at 50 meters (just short of 55 yards). While this type of  match-grade accuracy is impressive, it is no magic. Precise tolerances keep performance consistent, and it is easy to understand why the 92FS remains the best pistol in its class.

This pistol offers a variety of tactical features that make it equally safe, easy to use and dependable in the holster of military personnel as well as for home or personal defense. Its reversible magazine release lets you use either hand for tactical magazine changes, while its ambidextrous safety-decocker makes it flexible for right- or left-handed persons or for shooters trying out different gripping or shooting styles.

Its Bruniton finish is highly resistant to sweat and corrosion, and after shooting, a tool-free disassembly latch makes it a snap to take the pistol apart for cleaning. These and countless other useful features make the 92FS the choice of military and police professionals all over the world, as well as individuals wanting the absolute best for sport or self-protection.