Barrett has many 50 caliber rifles, in different models, configurations, and colors, from single-shot rifles to $12,000 models meant to turn a barn into splinters from the next county. These rifles are extremely fun to shoot, and the recoil is surprisingly manageable. If you’re looking for a one-of-a-kind shooting experience, owning a Barrett 50 caliber rifle should be on your bucket list.

Use GrabAQuote to BUY FOR LESS!

Watch this video review of features and specs for the Barrett M82A1 and M107A1 rifles.

Barrett 50 caliber rifles were designed in 1980 by Ronnie Barrett. They allow you to propel .50BMG with both accuracy and precision. They are designed to take out large enemy objects such as vehicles, so they’re not meant for hunting. The Barrett 50 Cal was an instant success. The CIA even acquired them for their fight against the USSR, and once they were military proven, militaries and police around the world were clambering for a Barrett 50 Cal. But what about the recoil? In Guns & Ammo, Robert Kolesar wrote: “If you’ve never shot a .50 rifle before, you’re probably wondering about recoil. After having shot almost 600 rounds of .50 ammo in about four hours, my team can comment from experience. While not as agreeable as shooting a 5.56mm for an extended period, it’s not as bad as you’d think. The weight, coupled with a recoil-operated action and a good muzzlebrake, keeps recoil manageable.”

In fact, American Rifleman Magazine described the recoil of a Marrett 82A1 as comparable to a 12 gauge:

“Ronnie Barrett’s semi-automatic M82 “Light Fifty” approached the problem of excessive recoil from two angles. First, the gun operates on the short-recoil principle. The recoiling barrel and bolt assembly acting against spring and buffer assemblies replace the sharp recoil impact of a single-shot or bolt-action design with a longer-acting, slower recoil force. Secondly, he fit the gun with a muzzle brake that was highly effective. Barrett’s muzzle brake redirects high-velocity gas and is claimed to lower recoil by almost 70 percent. The net effect is a .50 BMG rifle with perceived recoil comparable to that of a 12-ga. shotgun.”

In an article on the Barrett M107A1 in Shooting Illustrated, Adam Heggenstaller wrote of the .50 BMG round:

“The .50 BMG delivers impressive ballistics, but it's not immune to the effects of gravity and wind. For example, the 661-grain bullet in the M33 ball load, fired from a 29-inch-barreled Barrett M107A1, has a muzzle velocity of approximately 2,750 fps. If the rifle is zeroed at 300 yards, that 661-grain bullet will drop 6.4 mils—or more than 19 feet—at 1,000 yards. In a 10 mph, full-value crosswind, it will drift 1.4 mils—or almost 8.5 feet—at 1,000 yards. Both are enough to make you miss by a wide margin if you don't accurately correct for elevation and wind.”

This Barrett M82A1 bundle comes with a scope, a case, a handle, and a monopod. Its recoil isn’t as bad as you would expect from something this powerful, it’s easy to zero in on your targets, and it cycles seamlessly.

Beast mode! I waited 15 years to be able to afford this gun and this sight and their great prices helped me put this in my gun case and it is an absolute Beast of a gun and everything I ever dreamed it would be! Review by Brent S.

The Barrett M107A1 features a rear-mounted cheek rest to protect your face from the heat or the cold. The metal on these Barrett rifles can burn you if they sit in the sun for too long, but the M107 solves that problem. 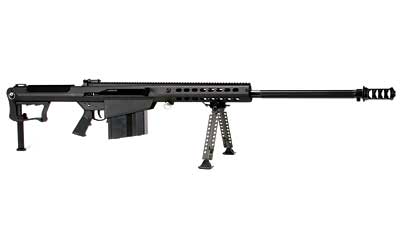