Both Smith and Wesson Model 637 and Model 638 are small revolvers with aluminum J-frames that shoot .38 Special ammo and hold five rounds. The difference is in the hammer. The 637 has an external hammer versus the 638’s shrouded hammer. You can buy both models with laser grips, trigger guard lasers, and choose between standard and Performance Center variants. Take a look at what these pocket revolvers have to offer. 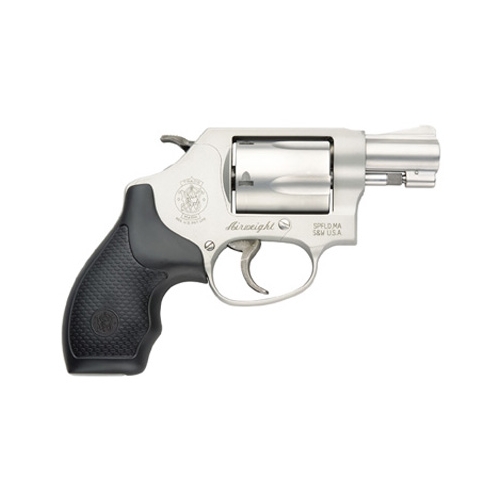 Not all revolvers are equal. The Smith and Wesson 637 is an outstanding pocket revolver that has been going strong for nearly seventy years, starting with the Chief’s Special in 1950.

The Smith and Wesson 637 is a .38 Special. It has an aluminum frame with a stainless steel crane and barrel. One of the newer Smith and Wesson features is a keylock above the cylinder release.

The Smith and Wesson 637 can be fired in either single-action or double-action. The trigger pull is surprisingly light. These types of guns are intended for one purpose, and that’s concealed carry. The graceful curves blend in with the body, and they boast reliability and pack a mean punch.

Smith and Wesson produces quality firearms, and the 637 is no different. While accuracy is acceptable, you need to keep a tight grip on the hammer and the trigger to handle the recoil of a fairly large round in a small gun. The reliability is excellent - you won’t have any problems with misfires or ejections. If you need something you can rely on to keep you safe for self-defense, the 637 is a top contender.

Guns.com says that “despite the number of revolvers out there today for both sport and personal defense, the J-frame Smith & Wesson .38 Special is still arguably the gold standard and a hot item to be found at many a big box store and mom-and-pop shop.” (1)

It’s also important to note that, “As mentioned before, the pistol has a hammer spur that allows the gun to be fired in single-action with a light trigger pull or it can be fired in double-action by simply pulling the trigger.” (1)

The Smith and Wesson 638 is also a J-frame pocket revolver, but the hammer is shrouded. Some find it easier to conceal this way because it doesn’t snag when removing it. It was originally designed with law enforcement in mind. The hammer is hidden, but still exposed enough to enable single action firing if desired.

If you’re having trouble envisioning the usefulness of a shrouded hammer, ammoland.com eases your mind, saying, “Stuck between traditional exposed hammer guns and enclosed “hammerless” designs, shrouded hammer guns were desirable long before Smith & Wesson made it a production reality with their “Bodyguard” revolvers in the late 1950s…. These guns featured a shroud built up over the hammer that stops it from snagging on the draw or in the pocket, but the hammer is exposed enough to be grasped and cocked for a single-action shot.” (2)

“The primary benefit of selecting the 638 would be the single-action capability as the gun can be fired by cocking the hammer and pulling the trigger or simply by pulling the trigger in double action. You get this while retaining some of the snag-free characteristics of the popular Model 642 and other double-action-only revolvers.” (2)

While there are some benefits to the shrouded hammer, you may also have some trouble and find that “thumbing back the hammer on the 638 isn’t as easy as on a standard revolver. It is mostly hidden, denying your thumb leverage. I found myself relying on the aggressive knurling on the hammer to allow me to drag it back for some single-action shooting.” (2)

The primary difference between the Smith and Wesson 637 and 638 is the exposed vs. shrouded hammer. The 637’s is exposed, and the 638’s is shrouded, but both are J-frames, compact revolvers perfect for concealed carry. On the contrary, the S&W model 642 has a completely enclosed hammer, making it even safer for concealment, but meaning you can only use it as a double-action revolver.

Terril J. Hebert says, “Though the exposed hammer 637 is still my favorite small revolver, the Model 638 revolver makes for a far better carry gun while still having a little extra versatility that the hammerless guns don’t have.” (2)

OTHER SMITH AND WESSON 38 SPECIAL REVOLVERS

Smith and Wesson offers many .38 Special revolvers in their lineup including the 442, 648, 642, 686, Pro Series models, Performance Center models, and the Bodyguard 38.

Smith and Wesson makes many different .38 Special revolvers with different hammers and various trigger guards, grips, and lasers. Accuracy with a J-frame like these requires very close range, and successive shooting isn’t its strong suit, but it’s great for concealing comfortably, and it’s powerful and reliable.