The Ruger Mark IV is the offspring of the original Ruger firearm made in 1949, simply called the Ruger Standard Model .22 Pistol. Since 2016 the Ruger Mark IV .22LR caliber semi-auto pistol has been the standard for an affordable, accurate, and easy-to-use handgun for learning, plinking and small game hunting. See specs, features and reviews below. 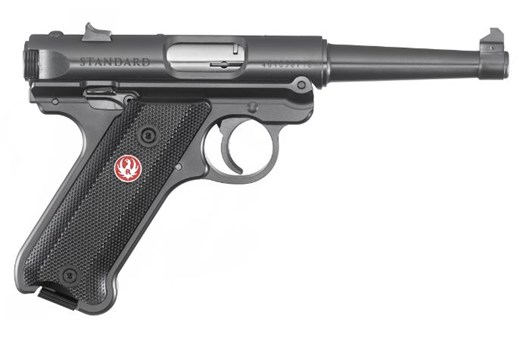 The Ruger Standard Model, or what we now think of as the Mark I, was introduced in 1949. It was Ruger’s first firearm. They’ve come a long way from the original, and the most recent release is the Ruger Mark IV. This improved version of the original design took into account feedback from users and advanced techniques in manufacturing to make it the best that it can be.

While the Hunter is the most expensive and the heaviest option, in many people’s opinion, it’s the most attractive of the three models. It features a satin finish, fluted barrel, and a sight radius of 97/8 inches. It’s rather impressive.

The stainless Target model weighs almost as much, but the aluminum Target model is considerably lighter and less expensive. Both of these have plastic black grips and steel post fixed front sights. The Hunter has laminate wood grips with the Ruger logo and a HiViz front sight containing a fiber optic insert. 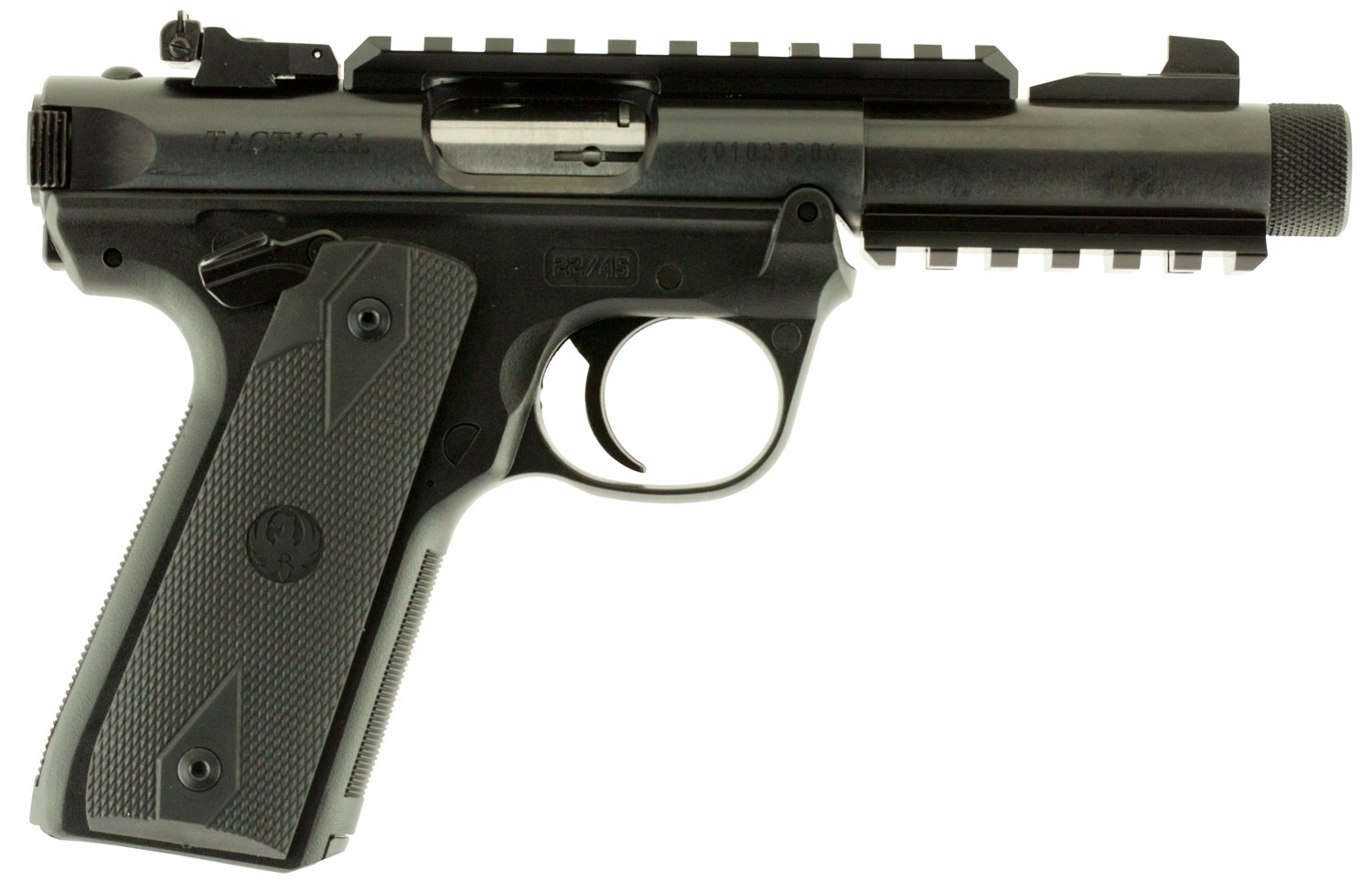 The Picatinny rails run the length of the upper receiver with another segment below the barrel in front of the grip frame. The receiver and barrel are made from alloy steel and the grips are finished in black oxide. The total weight of the Ruger Mark IV Tactical pistol is 34.6 ounces, which is lighter still than any of the standard Mark IV models.

It features the push button takedown system of all Mark IVs, and the ambidextrous thumb safety and a bolt stop, making the tactical version comfortable and ergonomic. Not to mention, the Mark IV is improved in reliability and can take all of your old Mark III accessories.

“Other features of the Mark IV series include several internal changes to the hammer, sear, firing pin and bolt, providing better reliability when feeding rounds from the magazine. The Mark IV guns are also compatible with Mark III accessories, including iron sights, scope bases and holsters.” (2)

The Ruger Mark IV 22/45 is also a handgun with adjustable rear sight and black oxide finished grips, but with lightweight polymer frame. It’s a trimmed down version of the Ruger Mark IV Tactical without the Picatinny rails, although it is drilled and tapped for them.

The Ruger Mark IV 22/45 has almost everything the Mark IV Tactical has, with the exception of Picatinny rails. While it doesn’t come with them, it’s drilled and tapped, so you can add your own. The ambidextrous thumb safety, one-button takedown, ergonomic bolt stop, and adjustable rear sight remain intact.

“The new Mark IV 22/45 features a bronze-anodized finish and is made with aerospace-grade aluminum that features ventilation holes to lighten the weight of the gun.” (3) 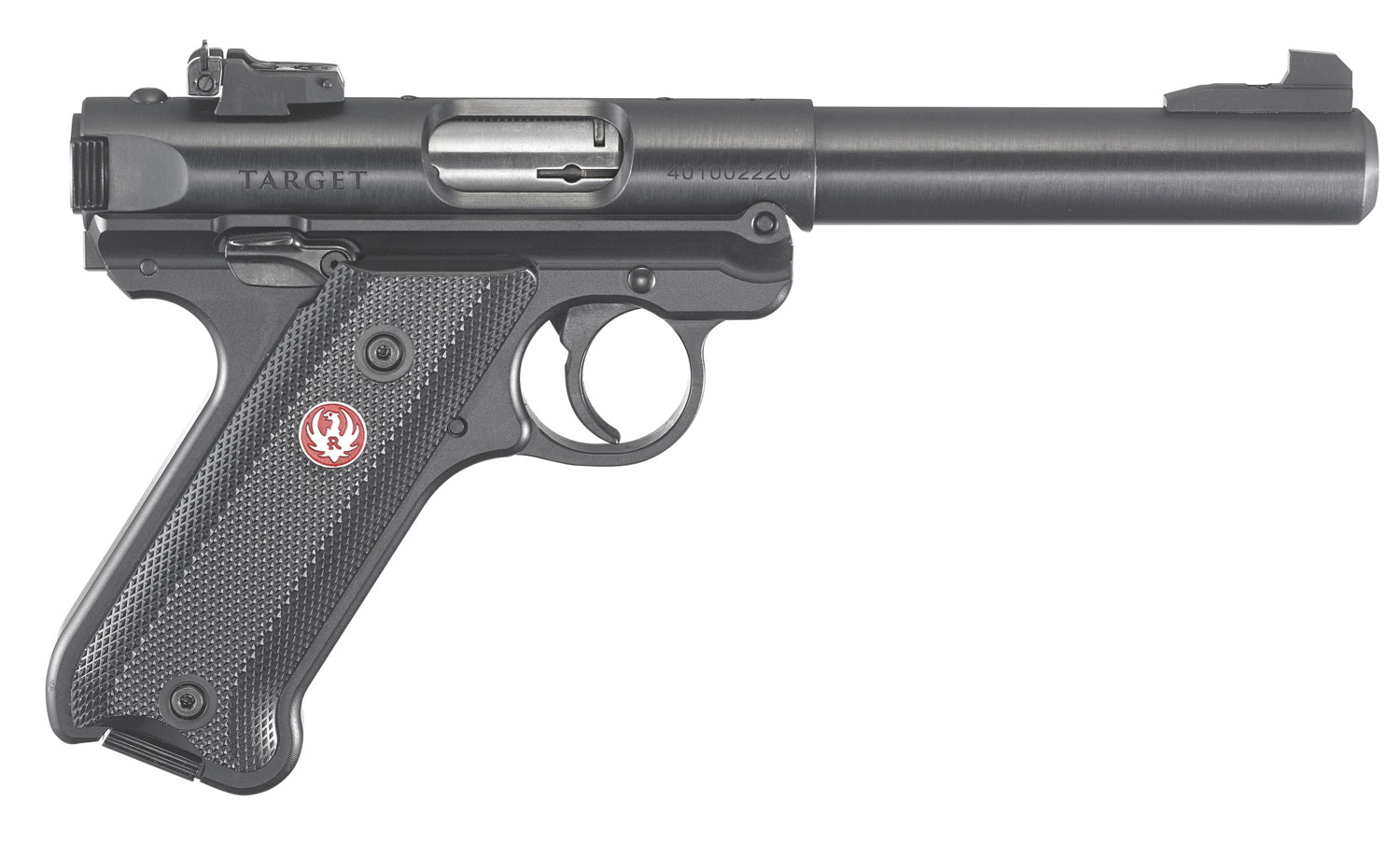 The Ruger Mark IV Target comes in two models. One is stainless steel and one is aluminum. The stainless steel Target is understandably heavier, and the aluminum one is considerably more affordable.

The Ruger Mark IV Targets are nearly identical in features, but very different in composition. While the stainless version weighs around forty-five ounces, the aluminum weighs thirty-six. However, both still tout the one-button takedown everyone is raving about, an ambidextrous manual safety, and an ergonomic bolt stop.

With various models and customizations available, you’re sure to find a Ruger Mark IV that suits your needs. It’s a popular pistol, and for good reason. It’s backed by the excellent Ruger name and offers value, reliability, and accuracy to your next adventure.