Designed for self-defense, military and law enforcement, the Mossberg 590 is a line of pump action shotguns available in a variety of barrel lengths, stocks and grips, and magazine capacities. With so many choices, there is a Mossberg 590 or 590A1 for you. 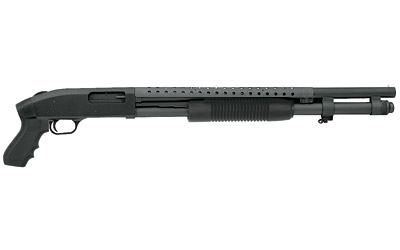 This popular version of the Mossberg 590 has a Raptor "bird head's" grip and 14” barrel, but NFA / Class III tax stamp and paperwork is NOT required. (Always check your state and local restrictions.) Why is the Mossberg 590 Shockwave not a NFA weapon? According to B. Gil Horman of AmericanRifleman.com,

"...the definitions that apply are found in the Gun Control Act of 1968 (GCA). Under these regulations the Shockwave is legally considered a “firearm,” not a shotgun. If, at the factory, a brand-new receiver is fitted with a pistol grip first instead of a shoulder stock, it's considered a Pistol Grip Only (PGO) firearm. If the overall length of that firearm, with the pistol grip and barrel installed, is greater than 26", then the barrel can legally be shorter than 18". In the case of the 14" barrel Mossberg 590 Shockwave, the Raptor bird's head grip gives the gun an overall length of 26.32". That makes it a firearm."

“I purchased this as a "fun" gun and wow am I happy! The Shockwave is not only fun to shoot, it performs like a champ! It handles full 2 3/4 rounds for serious business and loves to run mini shot too! All around great purchase, great customer service, and great shipping times! Grab-A-Gun + a Mossberg 590 Shockwave is a winning combo!” - Jason O.

First introduced in the 1980s, the Mossberg 590 came from the 500 series developed in 1960. It sports a heavy-walled barrel, corrosion-resistant finish, and a metal trigger guard and safety. During testing, the firearm underwent 3000-round endurance tests using both buckshot and slugs, and it only saw three malfunctions. Also part of the procedure were sand immersion tests, saltwater fogging, and interchangeability tests. When reviewing the Mossberg 590A1 line for Guns & Ammo, J. Guthrie shared his favorite models:

590A1 Adjustable (six-shot) - This scattergun hijacks the M4’s popular six-position stock to make it even more compact than the short-and-sweet gun I built. The stock is great should you don body armor or put the gun in the hands of a youngster or short-statured friend. Simple three-dot sights are brazed to the barrel and are very similar to the sight picture found on most duty pistols, consolidating training somewhat.
590A1 SPX (nine-shot) - This combat-ready model sits on the other end of the spectrum from short and sweet. Its 20-inch, heavy-walled barrel is ported and wears an AR-style front sight that pairs with a Picatinny-rail-mounted LPA ghost-ring rear sight for super-fast target acquisition. The rail allows a reflex optic to be easily mounted. The full-length magazine tube holds nine rounds of nasty, and yes, the shotgun comes with an M9 bayonet and scabbard.